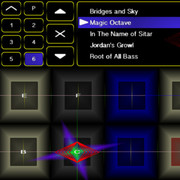 Wizdom Music has released Geo Synthesizer is a musical instrument and MIDI controller for iOS.

Jordan says: “Since touching a preliminary piano keyboard on an iPhone screen and realizing the amazing potential for musical expression on a multitouch device, I have been inspired to create next-generation musical instruments for iOS. Geo Synthesizer is a dream come true in many ways. It is the fastest truly playable iOS instrument that I have put my hands on to date. I can fly through the range of an instrument while expanding on the kind of advanced pitch control we introduced in MorphWiz. As someone who grew up with synthesizers, I can tell you that pitch bending has never been this good!

Geo Synthesizer for iOS is available to purchase for $9.99 USD.