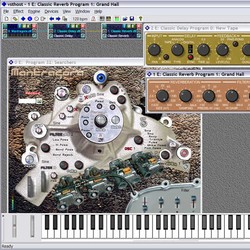 Hermann Seib has released updates for the free VSTHost and SAVIHost software for Windows.

VSTHost is a program to run VST PlugIns. In contrast to the big programs (Cubase, Nuendo, Logic come to mind), it is not a full-fledged giant sequencer package that needs many seconds just to come up to a point where it can say “Hello”. It’s relatively small, and hopefully will stay so, and it only runs PlugIns. No sequencing (well, it can play back simple audio and MIDI files), no elaborate recording facilities (although it does have a simple multitrack recorder built in). To make up for that, you can define very complex PlugIn setups and switch between them easily.

SAVIHost is a little derivate of VSTHost that has been crafted for the sole purpose of automatically loading exactly one VSTi.

Both VST host applications for Windows are available to download at no charge. Donations are welcome.